A partnership between the Fitter and Faster Swim Tour and the American Swimming Coaches Association will recognize and financially reward the top ten Age Group Coaches in the United States.

In early 2014, The Fitter and Faster Swim Tour Presented by SwimOutlet.com announced a partnership with the American Swimming Coaches Association (ASCA) to recognize and reward those who help young athletes achieve their potential – their coaches. A new award called the Fitter and Faster Swim Tour, ASCA, Age Group Coach of the Year Award will highlight the importance of great age group coaching to set the stage for future success in the sport. On an annual basis, ten coaches and the eventual winner, will be honored at the ASCA World Swim Clinic.

Many parents of the Olympians the Fitter and Faster Swim Tour works with give significant credit to their Age Group Coaches for the young men and women that these athletes turned out to be.  Some even say, that the age group coaches in some respect “helped raise the athletes”.

Every month, we speak with scores of thoughtful and passionate coaches of young swimmers who dedicate each day of their lives to the development of swimmers across America.

“We really believe in this award,” Fitter & Faster Tour’s founder and director, David Arluck, said. “Our clinics are all about connecting the success of our clinicians back to the habits, skills and passion they developed at the age group level. This award recognizes the accomplishments of the age group coaches who thrive on the opportunity to cultivate the talent of swimmers of all ability levels, keep swimmers in the sport, and lay the foundation for athletes to achieve success at the collegiate, national and international level. So, when the opportunity presented itself to create a new award recognizing the top ten age group swim coaches in the United States, we were all in.”

By presenting this award at the ASCA World Clinic, we are uniting Olympic, World Championship, and national-level success of the Coach of the Year Award with the significant achievement of the Age Group Coach of the Year award. This is a natural step from what we do every day in our Fitter & Faster Tour clinics, where we unite those international-level athletes with those who comprise the foundation of the sport: the age group swimmers.

For more information on the award please visit fitterandfaster.com/ news/special-award. 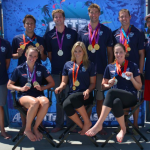