Donovan’s immediate background is in performance swimming, having worked as the Head Coach at the National Aquatic Centre Performance Centre for Swim Ireland for eight seasons. During that time athletes under his direct supervision represented Ireland at every level of the sport, including Shane Ryan (Rio Olympic semi-finalist), Barry Murphy (London Olympian, European Bronze medalist 2013) & countless others who broke more than 50 Irish Records during that time and won more than 100 National titles.

Donovan himself lead Irish teams to international meets during this time and travelled to competitions across the world on the Junior, European and World stage. His background is in club swimming having been the Head Coach in Trojan SC (Dublin), previously serving at all levels in the club from 10 & under’s all the way up to producing athletes representing Ireland on the World stage. In between these two roles Donovan spent the 2007/2008 season as a Volunteer Assistant at the University of Florida.

**Share this week’s Coaches Corner on your social platforms and spread our mission of helping swimmers get Fitter & Faster!

You can find the perfect  @Fitter and Faster Swim Camps  by clicking this link: https://fitterandfaster.com/swim-clinics-near-me/

Visit fitterandfaster.com/live to register for all of our upcoming webinars!

Be sure to follow us on social media to stay up to date on all future Coaches Corner episodes! 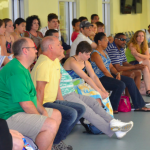