There’s a young swimmer on every single pool deck around the country that decided that they were going to finally take a leap of faith and join the local swim team.  Arriving on the pool deck for the first time, it was apparent that everyone around them was taller, stronger and probably faster.  Yet, despite disadvantage and failure staring straight at these young swimmers, a lifetime of achieving goals and dreams had just begun.

This was me. This still is and will always be me.

I, like many other swimmers around the country, know what it’s like to be an undersized athlete.  I was always undersized in every sport I every participated in.

I wish I could begin to describe all the different struggles that I faced along the way to achieving my dreams.  There was the fear of doing any event longer than a 50.  There were kids standing head and shoulders above me.  I’ve read, and even heard parents and coaches talk, about how I would never be a great swimmer because I wasn’t tall enough, strong enough, and because I loved to do other sports.  But what people didn’t know about me was that I love to prove people wrong.  I love to look at them after my successes and send them a mental message that says you will never know what’s inside of me.  The truth is being a taller and stronger swimmer helps you swim fast.  But the qualities of working hard, improving your skill, and believing in yourself are more important.

Small in Stature, Large in Heart

It’s not just me that has been successful as a shorter athlete.  There are other athletes all over the United States that feel the same I do.  In fact one of them went to the Olympics with the United States Swim Team with me this year.  Claire Donahue is both an amazing swimmer and person, and works incredibly hard at what she does.  Recently a teammate said to her “Claire, you’re so small.  I don’t see how you can go so fast.  Your body type isn’t exactly the best for butterfly.” She told her teammate that it’s all hard work. She pushes herself every day in practice because she is motivated to show that your body type doesn’t always have to be the deciding factor in how fast of a swimmer you are.  Her teammate responded by saying: “That’s got to be it; I don’t know what else it could be.”  Claire’s teammate is right.  A lot of what makes us great swimmers is the drive and motivation to work hard.

Being a big, strong, powerful swimmer seems like it would be most important in sprint events.  One of my friends and teammates at Auburn University has proved a sprinter doesn’t have to be built in that fashion.  Arianna Vanderpool-Wallace is one of the faster swimmers ever.  In fact, no swimmer in the NCAA has ever been faster than Anna in the 100 free.  Anna, like Claire, me and lots other swimmers around the world knows exactly what it feel like to stand next to competition and feel like you are looking straight up.

Anna describes it best when she told me, “As a female sprinter, being below 5’10” is unheard of. To march out to the blocks at 5’6”, several inches shorter than your competition is intimidating, but at the same time it motivates me. I am out there for all the other swimmers that are told that they can’t do it because of their height or stature. There may be swimmers that are built in the way that is ideal, but that isn’t all that swimming is about. To me athletics are all about hard work and determination, the people that stand above the rest are those that work to get there. So every time someone tells me I am too short, I am urged to work that much harder to prove everyone wrong.”

To me, the most obvious and glaring similarity between Anna, Claire, and myself is that we take our disadvantage to motivate us.  The easy thing to do when someone says something negative to you is to allow what they say to stay negative.  The harder thing to do is to take that negative comment and turn it into motivation.  A lot of times, the reason we try to be great at swimming is because we want to make someone else happy or impress someone else.  Thinking in that manner can only take you so far.  In order for you to be successful as an athlete you have to find the motivation from within.  For swimmers like Anna, Claire, and myself the motivation comes by proving to ourselves that we can work really hard and beat the odds despite our stature.  We want to be successful because we believe in ourselves.  We want to be the best at what we do, and we aren’t going to let a small disadvantage like height stop us from being great.

Being a swimmer means that you are a part of a community and a sport that allows you to get close and interact with the very best in the world.  Young athletes get to look up to and learn from those who have gone through the struggles in order to be great.  Being a swimmer and being in that same community means that the best athletes in the world get the opportunity to constantly remind themselves of where they came from.  We see our personalities and our struggles in the way that young swimmers still act around a pool.  Some of us are built to be big strong powerful swimmers; other are built smaller.  But all swimmers from the kid that just walked on the pool deck for the first time to the seasoned veteran all have to work really hard to chase their dreams and prove doubters wrong.  We share a common ground that no one can ever take away.  That is why I am like you now and forever. 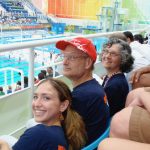 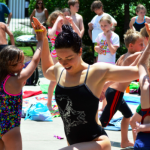