Like any sport or activity, swimming has its own lexicon, some of which can be quite confusing. We’ve compiled a swim glossary with a list of terms that have tripped up many a newcomer and translated them to plain English!

Age-group swimming: The term applied to youth club swimming in America, both year-round and summer league.  Swimmers compete in the following age brackets: 8 and under, 9-10, 11-12, 13-14 and 15-18. Their age on the first day of a swim meet is their age for the whole meet, even if their birthday falls during the competition. Swimmers are not divided by age at high school and elite meets such as the Arena Pro Swim series, so in those cases, you may see 14-year-olds competing against 18-year-olds or even swimmers in their 20s. However, swimmers under 18 can set a national age group record while competing in an “open” meet. 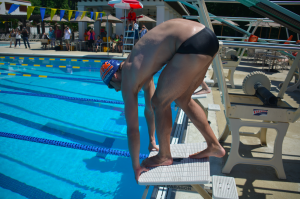 Blocks: The platform from which swimmers begin races. Decades ago, they were simple metal or wooden blocks and looked more like podiums than the sleek, high-tech ones of today, but the old name has stuck.

Catch: The point in a swimmer’s stroke at which the swimmer’s hand grabs the water in front of them and applies downward pressure to move the body forward.

Club team: Generally speaking, this is the USA Swimming or YMCA sanctioned swim team under which your child trains and competes. Your kid does not represent the club team when competing at high school or summer league meets.

Deck: The area surrounding the pool at practices and meets, not including the bleachers or stands. USA Swimming rules prohibit parents from being on the deck at practice. At meets, only swimmers, coaches, officials and select volunteers may be on the deck.

Distance: Generally, freestyle events 500 yards or 400 meters or longer. It can be argued that the 400 individual medley is a distance event.

Division I, II, III: The three levels of competition within the National Collegiate Athletic Association.  Division I programs tend to be the best funded and provide more athletic scholarships (except for Ivy League programs) but they demand the biggest time commitment. Division II schools tend to be smaller and while they do offer scholarships, they may offer fewer full rides in favor of spreading the money across the team. Division III does not offer athletic scholarships but time limits on training and competition may yield a better balance between academics and sports.  That said, some top Division III programs may actually be faster and more competitive than Division I programs. Dolphin kick: Once just the leg motion for butterfly, the dolphin kick (which mimics the undulating motion by which the sea animal moves through the water) is now considered the fifth stroke. It is done underwater in streamline position to in order build momentum on fly, freestyle and backstroke starts and turns. Swimmers are even allowed to take one dolphin kick in breaststroke.

Dryland: A catch-all term for all physical conditioning done outside of the water. This can range from pre-practice stretching to regular sessions dedicated to lifting weights or doing resistance exercises, yoga, Pilates, spin classes, etc.

Hand entry: The position the hand is in at the time it touches the water after the recovery and before the catch phase. The hand should enter with the fingers together and pointing downward, as if putting on a glove. It should also enter in line with the shoulder to avoid injury. Heats: At large, invitational-style meets, swimmers must qualify for the finals by posting one of the fastest preliminary times. They are grouped in heats according to their entry or seed time, with the fastest swimmers in each heat assigned to the middle lanes and each heat getting progressively faster. The fastest swimmers are distributed among the last three or four heats, with the fastest assigned to lane 4 in the final heat and the next fastest athlete in lane 4 in the penultimate heat, etc. This is referred to as circle seeding.

Heat sheet: At large meets, officials distribute printed listings for each heat of each event to be swum. Swimmers should already be aware of what events they are entered in, but the heat sheet will tell them the order of events as well as the group and lane to which they are assigned. Athletes should take this this timetable into consideration when planning when to warm up and when to leave the deck to go to the bathroom or the vendor area, lest they miss their heat. 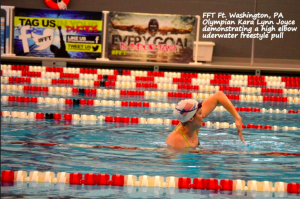 High elbow:  By keeping the elbow hinged during the recovery phase above the water, the high elbow catch maximizes the surface area making contact with the water. It essentially positions the forearm, wrist and hand to act like an oar, pushing more water than the hand could manage on its own. Thus, the swimmer covers more distance with each stroke. This technique also keeps the shoulder in a more stable position, which helps prevent repetitive-use injuries.

IM: This term stand for individual medley, an event in which a swimmer performs all four competitive strokes. The order is butterfly, backstroke, breaststroke, freestyle. (The order is different in a medley relay, where the order is back, breast, fly, free.) IM race distances are 100 (one length of each stroke, contested only in a short course, or 25-yard or meter pool, mostly for 10-and-unders), 200 and 400. In a short-course pool, a 200 IM is 50 yards/meters or two pool lengths of each stroke; in a long-course or 50-meter pool, it’s one length. In a 400 IM, the swimmer does 100 yards/meters of each stroke. In short-course, that’s four lengths; in long course, it’s two.

Long course: A 50-meter pool. This is the true definition of Olympic-sized pool. Most long-course racing is done in the summer from May to August. A swimmer’s long-course times will generally be slower because there are fewer turns.  There are several online calculators for converting short-course times to long and vice versa.

Recovery: This term has two meanings for swimmers. It can pertain to the point in the stroke in which the hand is above the water line preparing for the next stroke. It can also be used to describe the process of resting and refueling after practice or a race.

Scratch: To withdraw from an event at a meet. Oftentimes, heading into a major meet, swimmers will enter every event for which they have qualified in order to keep their options open and then withdraw (or opt not to compete in finals) based on how they feel at the meet.

Sculling: A drill in which the swimmer gently moves their forearms and hands back and forth through the water, developing a sense of how each move affects the swimmer’s forward progress. 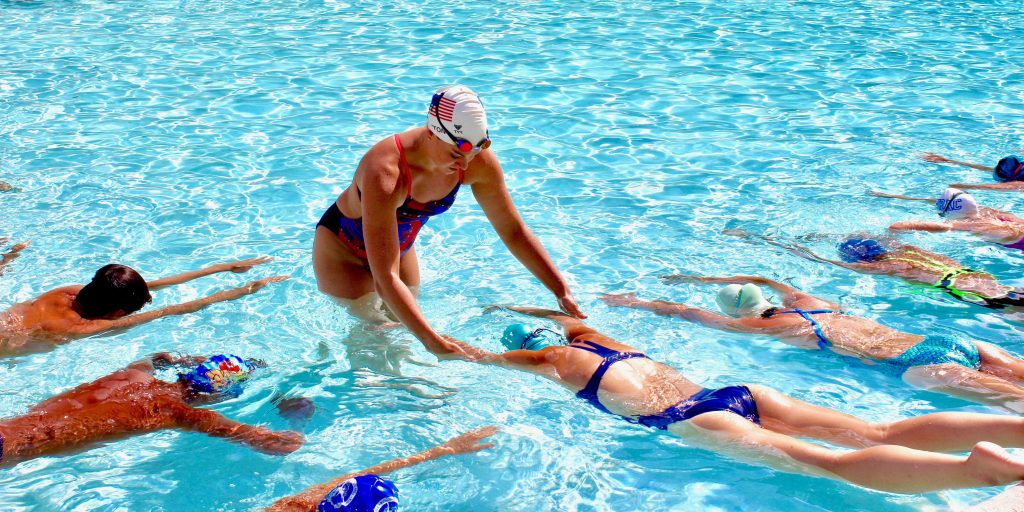 Short course: In America, this term usually means a 25-yard pool. Most USA Swimming-sanctioned racing during the fall, winter and spring is done in short-course yards, including high school and college meets. The term can also pertain to 25-meter pools, although they are more common in summer league and abroad.

Split: The time for a portion of a race, such as each 50 of a 100-yard-race. Coaches will compare the split for the first (or front half) part of a race with the second (or back half) to determine where the swimmer was fastest and slowest. A negative split means the swimmer swam the second half faster than the first. 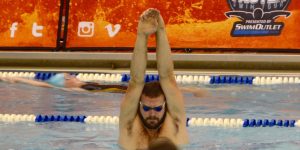 Streamline: When the body is pointing in a long, straight line with the arms at the ears, locked together with one hand on top of the other, while the legs are together and the toes are pointed.  It is used on starts and turns because it minimizes drag or resistance underwater.

Taper: A few weeks before a major meet, the coach will begin scaling back the volume or workload at practice in favor of working on fine details, like starts and turns. This allows the swimmer to get more rest in hopes of dramatically improving their times at their goal meet. Warning: You may find your swimmer suddenly has a lot more energy after practice while at the same time telling you, “I can’t take the garbage out because I’m on taper.”

Yardage: The total distance your swimmer covers in per practice, day or week (also referred to as volume) and usually measured in yards (e.g. “my child’s group practices 5,000 yards a day or 25,000 yards a week”). This number can vary widely depending on your child’s age, whether s/he sprinter or distance swimmer, how long the practice is and their coach’s philosophy. Note: it’s still called yardage even when they’re swimming long course meters.

Underwaters: The time a swimmer spends below the surface doing dolphin kick in streamline position or the breaststroke pullout. Swimmers are permitted to go 15 yards or meters underwater off the start or turn.

Zones: A regional long-course championship meet held at the end of the summer, comprised of age-group swimmers from one of four zones: eastern, western, central or southern. In this case, swimmers may represent their city or state on a relay with swimmers from other clubs. 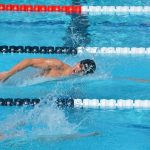 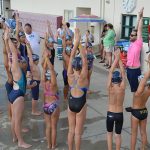 Clinician and Coach Interaction at the Fitter and Faster Swim TourClinician Articles, Participants and Teams