Tips to Up Your Game

Fitter & Faster Tour is now producing Water Polo clinics throughout the United States.  Our very first clinic was held in Western Springs, Illinois in 2014. It was a great success and we returned to the city in less than one year and once again had sold out clinics.  We look forward to teaching the great sport of water polo to many more athletes throughout the United States in the years to come. For those of you that know very little (or nothing) about the sport of water polo, we turned to Merrill Moses to give you a quick overview so you can understand the game a little bit better.  Perhaps one day you’ll want to try it out. At the very least you’ll understand the game better when water polo is on television during the Olympic Games.

Water polo is an action packed game that some of the top swimmers in the world have grown to love.

Water polo is a mix of basketball, soccer and hockey.

The water polo ball is the shape and roughly the same size of a volleyball, but it has grip on it so it is easier to handle in the water.

The object of the game is to score more goals then your opponent to win the game.  Each goal only counts as one point.

On an Olympic Team there are 13 players that travel.  There are eleven field players and two goalies.  One goalie and six field players play each game at a time. Games allow for substitutions.

While a water polo game consists of four, eight-minute quarters, a full game usually lasts one hour.  The reason it runs this long is because there is stoppage time with time-outs that last two minutes.  There are also two minutes in between quarters and five minutes at halftime. On the men’s side the possession shot clock is set to 30 seconds and on the women’s side the possession shot clock is set for 35 seconds.  Each quarter begins with a sprint to the half point in the pool to gain possession of the ball.  All field players are only allowed to use one hand at a time to control the ball.  The only player in the pool that can use two hands is the goalkeeper.  The field players are constantly going from the horizontal swimming position to the vertical “eggbeatering” position.  Eggbeatering is the term used for how water polo players stay balanced and stay in the vertical position without sinking.  We are moving our legs vigorously in a circular motion, which looks like an eggbeater machine when you look at it being performed from underwater.

There are two types of fouls in water polo: “minor” (ordinary) fouls and “major” (personal) fouls. There is no limit to the number of minor fouls a player may commit. In contrast, once a player has committed three major fouls, that player must leave the game and may not return.

Minor Fouls happen throughout the whole game. When a minor foul has occurred a player gets a free pass where the defender has to back up, but still may put her/his hand up to try and block the opposing pass.  If the minor foul happens outside the five-meter line then the athlete can take a direct shot on goal.

A major foul usually consists of holding, sinking, or pulling back an opposing player.  When a major foul occurs the defender is excluded for 20 seconds… and as stated before, once a player commits three majors in a game, the player is ejected. There also is a five-meter penalty foul.  This foul is called when a player commits any kind of a foul in the penalty area (inside the five meter line) that, in the opinion of the referee, prevented a probable goal.  Once this foul is awarded, an athlete gets to shoot a penalty shot at five meters on the referee’s whistle – just between an offensive player and the goalkeeper.

If you swim, I encourage you to give water polo a try.  It is great cross training and will improve your swimming and endurance.  Studies have shown that water polo is the most physically demanding sport in the Summer Olympics.  Also who doesn’t like the combination of swimming, wrestling and throwing a ball as hard as you can in the goal, or in my case blocking it.  I hope to see some of you out on the pool deck soon with a water polo ball in your hand. 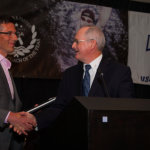 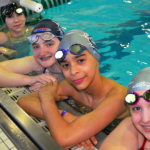