The Final 24 Hours Before RACE TIME!

The countdown has begun and you have exactly one day before the biggest race of the season. You’re shaved, tapered, and feeling fast. It’s time to put the finishing touches on your perfect race, but how should you spend those last 24 hours? We asked some of Fitter and Faster’s elite swimmers to walk us through their race-prep routine, taking us from 24 hours out to the moment that they take their marks.

24:00   The day before your event, try to wake up at roughly the same time that you plan on being up on race day. This lets you do a practice run of your plan for the following day. The goal is to eliminate any surprises so that you can be cool as a cucumber as you walk into the pool.

Perform your warmup routine as close to the time you expect to do it on race day. This helps your body get used to swimming at that time. What you do during that warmup will be dictated by the race. For instance, Olympic gold medalist Lauren Perdue likes to prepare for a 200 free by doing an easy 1,200 meters, followed by 4 or 5 50s where she tries to consistently hit her goal pace. NCAA champion Sarah Henry does a longer warmup for her main event, the 400 IM, mixing all four strokes with kick, drill and pace work. She also sets time aside to fine-tune her back-to-breast turns for whichever pool she’s in. Olympic sprinter Jimmy Feigen makes mental notes of the markings on the bottom and the lighting in an attempt to get used to each pool’s walls, and starting blocks.

22:00   When deciding what to eat the day before a big meet, most elite level swimmers follow the motto, “tried and true, nothing new.” In other words, stick to what you know. If you have never eaten sushi, you probably shouldn’t try it the day before a big meet! Some swimmers have the same thing every meet if it’s available. Olympian Claire Donahue will try to hunt down the No. 4 Turkey Tom from Jimmy John’s for lunch during meets. American Record holder Cody Miller also likes to eat a light and simple sandwich with a cup of fruit and some green tea. But all agree on the importance of staying hydrated all the way up to race time. All of these elite athletes keep a water bottle close by; Laura Sogar, a breaststroker on the U.S National Team, goes one step further by lugging a gallon jug around during meets. 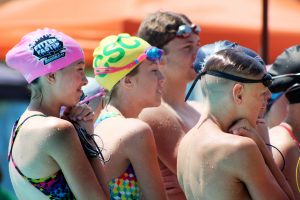 20:00  REST is the key word in the hours before your race. Stay off of your feet! Henry kicks back in her hotel room trying to move as little as possible. LIke many elite swimmers, she wears compression garments to keep her blood moving while relaxing. Before meets, Miller loads up his iPad with movies and comic books and spend all of his downtime watching and reading. Feigen prefers to hang out with his teammates and play cards. (His go-to game? Spades.)

16:00   Most elite swimmers favor doing another short and easy warmup just before dinnertime. This swim doubles as a form of meditation for many. They’ll swim long and smooth, focusing on relaxing their bodies and minds. This connection to the water allows for a confident mindset leading into an important race. The goal is to exit the water feeling calm.

14:00   One of the most common questions that Fitter and Faster clinicians get at swim clinics is, “What do you eat for dinner the night before a big swim meet?” The answer: Whatever you normally eat! Many people think that carbo-loading is a good idea, but if you don’t normally eat a ton of pasta and bread, then the night before an important race is not the time to start! Look for something simple and familiar. Use this balanced formula: protein + carb + vegetable = happy tummy and lasting energy. Three-time Olympian Kara Lynn Joyce counts on a chicken breast with some rice and mixed vegetables to help her feel her best. Pay attention to portion size, too. 2012 Olympian Clark Burckle has a “one plate rule” at swim meets. He never wants to be too full or too hungry so he limits his meal to one plate and snacks whenever he feels hungry.

12:00   Even the world’s best swimmers get nervous before a big competition and can have trouble falling asleep. Claire Donahue goes through an “attitude check” routine to stay confident and keep things in perspective. Simply put, she reminds herself that it’s just a 100 fly; it’s the same 100 fly that she’s done a thousand times. 2012 Olympian Connor Jaeger will take in an episode of his favorite show, The Office, while Feigen turns to his favorite movie, Up. Most elite athletes will try to simply clear their mind and not think about the meet the next day. All the hard work has been done. Now it’s time to let your body take over. 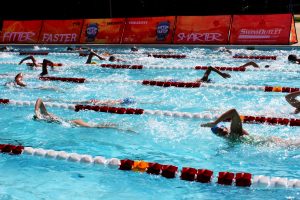 04:00   Some athletes like to do a “wake-up-swim” on the morning of competition but their approaches vary. Perdue goes to the pool early for an 800 to loosen up and kick-start her metabolism. Sogar heads down to the hotel pool to splash and play in the water. Henry only goes as far as the bathroom for a hot shower to help her wake up.

03:00   Breakfast follows the same rule as the other meals: “Tried and true, nothing new.” The most popular options for FFT athletes? Oatmeal with fruit and nuts or  toast with eggs. Feigen pays attention to the pH balance of his breakfast food,

avoiding anything too acidic (orange juice) or basic (milk). Some breaststrokers like Miller, Burckle and 2012 Olympian Scott Weltz prefer to “swim light” and don’t eat much breakfast before swimming. Most adult swimmers will indulge in a large coffee for a little kick of caffeine.

02:00   Main warmup routines vary greatly among athletes, but they generally begin about two hours before race time. On one end of the spectrum is Joyce, a sprinter who listens to her body and swims until she feels good. This can be as short as a 150 or as long as it takes to feel loose. At the opposite end of the spectrum is Sarah Henry, an IMer who will put in about 3,500 meters the morning of a big competition!

Some swimmers are partial to highly structured warmups. Clark Burckle does the same set before every swim meet. He starts off with a 300 swim, 100 kick and 200 IM drill. Next, he does 3 x 150 (scull, drill, build swim), 3 x 100 (kick, drill, swim) and 9 x 50 (3 reps each of underwater breaststroke, easy drill, and descend). Others prefer to feel things out that day. Jaeger doesn’t have a structured routine, but there are common themes in all  of his warmup. He aims to get in  a few heart rate spikes, do a little speed play, and dial in his race pace.

01:00   After finishing the main warmup, the focus is on getting dry and staying warm. Most swimmers will have a small snack. Females will put on their racing suit about an hour early to make sure that if anything rips, they’ll still have time to get another. Males don’t have as much fabric to worry about, which allows them to wait until about 30 minutes before race time to suit up. Most swimmers will do a final, quick warmup before heading to the ready room. Weltz likes to spend this time doing strong pullouts and fast breakouts. 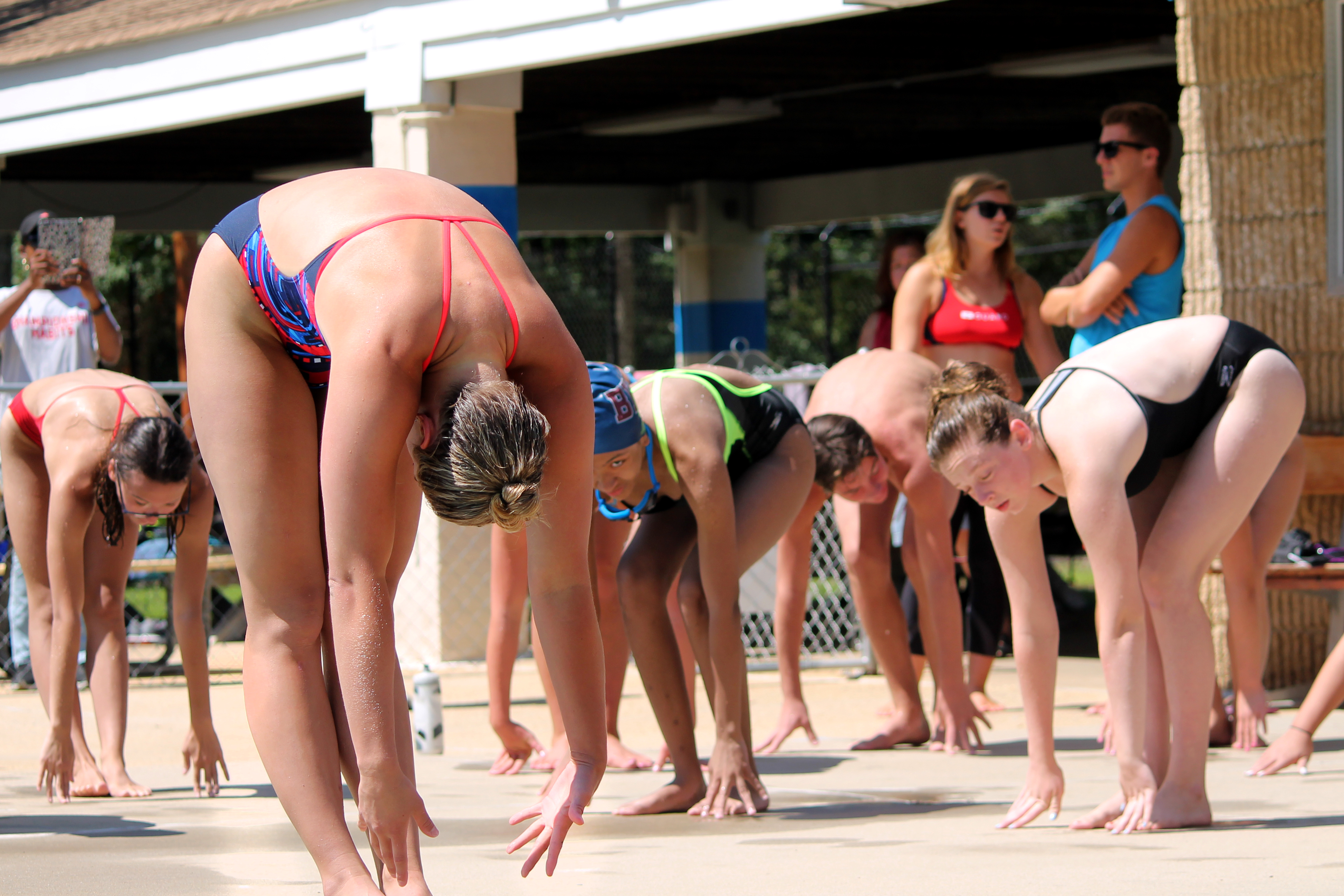 00:20  Everybody is different in the ready room. Some swimmers listen to music, some talk to friends and some sit in silence while some stretch or jump around. Everybody creates their own ritual to get them in the right mindset to race. One common denominator: they all try to maintain powerful body language and sit tall with the head held high, both of which which help promote feelings of strength and confidence. 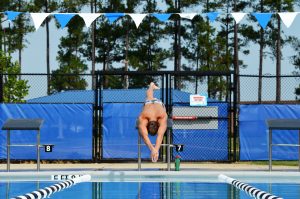 00:01   In the last moments before each swimmer steps up onto the blocks, their bodies are in peak physical form.  Many elite athletes rely on deep breathing to flood their body with oxygen and help them remain calm. Joyce aims to go from 0-100 as soon as she launches off the blocks. She likens her whole pre-race routine as shaking a bottle of soda, but keeping the cap on as long as possible. “Then you finally pop the top and let it explode,” she says.

Just as in the ready room, swimmers all have different routines behind the blocks. Weltz keeps his clothes on as long as possible to keep really warm — almost to the point where he feels too warm by the time he steps up on the blocks. Henry swishes some water from the pool in her mouth. Burckle finds his family and gives them a wave. Once up on the blocks, Perdue claps exactly three times and Miller takes one last look down the pool.

These elite swimmers have all taken different paths to the starting blocks, but they’ve all arrived at the same place: race-ready status. Finally, they all hear the same thing: “Take your marks” and off then they go! 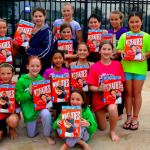 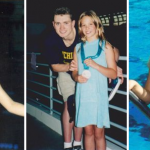 Guess the Olympic Athlete from “Then” and “Now” PhotosFun and Games